Courtesy of the AG Mag magazine.

The Duivenvoorden Farm began when Marc Duivenvoorden’s parents emigrated from Holland and started a dairy in Cottonwood, CA. It was a conventional dairy for 30 years. After the elder Duivenvoorden passed away Marc kept the dairy going. In 2004 Marc and his son Seth were milking 60–80 cows a day and selling their milk to a creamery, but after the 2008 economic downturn they made the decision to do something 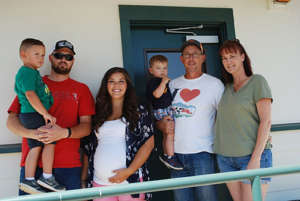 Seth, who majored in animal science at Chico State and worked at the university’s organic dairy, puts it this way, “Friends were asking us about raw milk. We were looking for new ideas, how we could survive in a different way. We researched herd share programs and used the help of the Farmer to Consumer Legal Defense Fund to establish a Herd Share Program. That’s when we started making changes. We grew our business by word of mouth.”

The Duivenvoordens sold herd shares. Every herd share owner owns a 1/10th of 1% leasehold interest in the herd. For a set price, a milk consumer is guaranteed a gallon of raw milk a week. Seth again, “After two years of doing herd shares, we were making more on our milk than we were when we took it to the creamery.” The creamery wanted all the Duivenvoorden’s milk. So, the family dropped the creamery. “They made the decision for us,” says Marc. “We were well on our way with our herd shares, within two years we had between 200 and 300 families getting raw milk from us.” They milk their cows once day. “It’s about quality not quantity,” says Seth. “When we milked twice a day, we noticed that in the mornings, when cows had rested all night, the milk was much richer, there was more butter fat. On the second milking it was less creamy; there were less solids in the milk. “Most dairymen are scared of milking only once a day, thinking if you don’t milk twice a day the cows will get sick. But if you take out the stress of standing on concrete six to eight hours a day, and instead replace it with once a day two hours max, with the rest of the time on pasture there’s less stress. “Our cows are on pasture year round. In the winter, when the pasture is in its dormancy stage, we feed grass hay and our own hydroponically grown barley sprouts.”

Seth describes their herd share owners as “local, dedicated raw milk consumers who value sustainable farming and knowing their farmers. The herd share owners come to the Duivenvoorden Farm once a week to pick up their milk. They bring their kids and make it an experience for the whole family. They see where their milk comes from and also see the cows, goats, pigs, cats and dogs. A lot of young families have educated themselves about where their food coming from. These people are creating a relationship between their food and the farmer.” 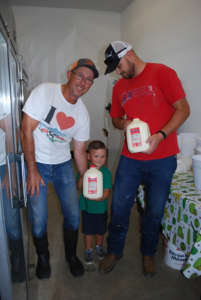 In 2015 Duivenvoorden Farms saw a plateau starting to form with the growth of the herd share, and coincidentally the state was pushing them to build a milk plant due to the amount of cows they were milking for the herd share. The milk plant solved both issues by complying with the state and expanding their business. So the family business plan shifted once again, to building a milk plant and selling their milk in retail locations, now up to eight.

Seth and Marc were ready. “We were already set up to be a Grade A dairy and we built the milk plant so we could sell our milk in retail outlets, as Grade A certified.” Sounds simple, but it took two years of research and planning, including learning what’s acceptable to the state. They installed solar and built a commercial kitchen. “We’re at the beginning of what I hope will be a raw milk business.”

Was the move to build their own creamery a good one? Seth answers, “Yes, a good move. We cut out the middleman; we’re doing it on our own, which means we get to control our product, down to the finished bottle of milk – the benefits outweigh the headaches. We might be the smallest milk plant in California and the largest herd share.”

Duivenvoorden Farms has been a member since 1995.